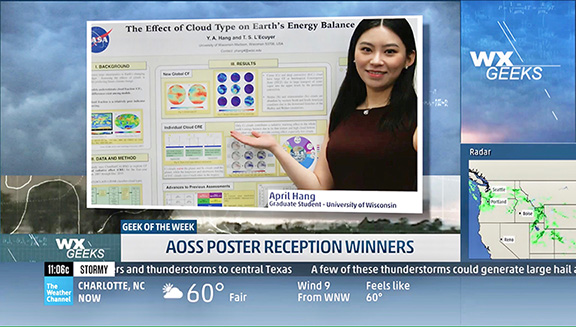 While clouds may be some of the most easily recognizable weather phenomenon, their role in the Earth’s overall energy balance is not well understood. As part of Professor Tristan L’Ecuyer’s group, PhD student April Hang is researching how cloud types and aerosols play a role in Earth’s overall energy budget. She has recently published two papers covering this exact topic. Her findings suggesting that the presence of stratocumulus clouds in the southern oceans helps enhance cooling effects and that clouds are some of the strongest contributors to the energy imbalance between the Northern and Southern Hemispheres.

April’s most recent papers can be found here: [x] [x]

This interview has been edited for clarity.

How did you become interested in clouds and aerosols?

For clouds, my hometown is near shanghai, and there’s a lot of people and a lot of buildings there. I knew that there were a lot of cloud types from reading textbooks, but it’s hard to observe them from where I lived. When I moved here, because there are a lot of farms and less buildings, it was easier to see lots of different cloud types, especially on the drives between Madison and Chicago and over Lake Mendota. I saw people taking pictures of them and got to see weather events, and I thought that it was amazing how many cloud types there were. So when my master’s advisor asked me what I wanted to study all of those years ago, I said I wanted to study clouds.

For aerosols, my dad is lung disease doctor, and I witnessed that during the past twenty-two years, my dad would come back from the hospital very tired from all the patients that needed help. After seeing that, I felt that air pollution is something that impacts a lot of people, and I wanted to do something that includes both clouds and aerosols. From one perspective, aerosols and air pollution impact people’s health, and both clouds and aerosols impact climate change, which also impact people who face threats from climate change. I’m not a doctor, but I hope I can help people suffering those threats.

What is the overall goal of your research?

My research focuses on nine types of clouds. Eight of them are single layer clouds and the last one is a multilayer cloud. From the ground, most clouds look like they have just one layer, but actually, most clouds have more than one layer, sometimes up to three or four.

I’m doing satellite observations, measurements, and reanalysis of model benchmarks. Currently, cloud and aerosols contribute a lot of errors to climate models. For example, we all know that there is going to be warming in the future, but we don’t know how much it’s going to be. Different models have different values because we don’t know all of the variables that are going to apply to the models. For my research, I use active sensors on satellites that can detect the vertical structure of clouds, but in previous years, the CloudSat sensors observed the clouds just from a horizontal perspective and had no vertical structure data built into the old algorithm. It would do some math to build the vertical structure of the cloud, but there were no measurements being taken. This is obviously a big improvement for making models more accurate.

What do your papers cover?

For my recent two papers, I focused on cloud types. One paper focused both on the top of the atmosphere and surface cloud radiative effects. We compared our results with a famous paper from 1992 that, as I mentioned before, used passive sensors that only measured in the horizontal direction. The results show that there were a lot of multilayer cloud types that make the most contribution to Earth’s energy balance. The second paper we have talks about cloud radiative heating. Since we know the vertical structure of the clouds, we can figure out the heating sections of the clouds. We also compared different hemispheres and did some research about the general circulation, and found that multilayer clouds might contribute to the general circulation.

What sorts of methods did you use to collect the data for these papers?

We use three satellites: CloudStat, CALIPSO, and MODIS. For the second paper, I’m also using some reanalysis data to check the contributions of cloud heating to the entire Earth energy balance.

What has been the most challenging aspect of your work so far?

Was there anything particularly surprising that you found while doing research?

The results we’ve collected was fine, but I was more surprised by the journey into research. As a master’s student, I found out that I liked doing research, which is why I’m continuing as a PhD student.

What do you consider to be the most interesting aspect of your papers?

What projects or papers are you going to be working on now and in the future?

I have another paper about upper tropospheric clouds, and I’m waiting for some new CloudStat data to update some figures in that paper so I can submit it soon. I’m also working on the project I mentioned on solar energy, and beside that, I’m working on another paper with Andrew Dzambo that will be submitted next month. There is an online climate course in our department that we TAed over the summer, and we’re writing a paper about said course.