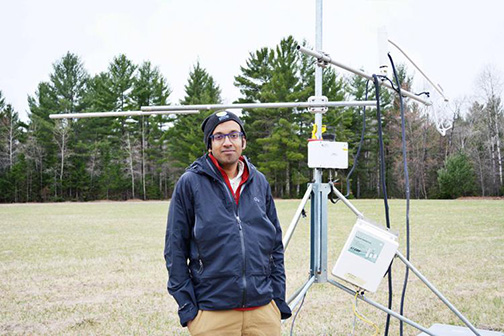 While awards and appointments attract much of the news attention, the Atmospheric and Oceanic Sciences department has a large variety of work going on behind the scenes. As part of our Monthly Highlights series, the AOS news page will be featuring different faculty and student projects once a month. These highlights will be showcasing published papers, community outreach events, field campaigns, Q&As on climate change and weather phenomenon, and other topics as they come up.

Since the beginning of the summer, Professor Ankur Desai has been working on an extensive field campaign in northern Wisconsin. In a humorous nod to its state of origin, the campaign has been dubbed CHEESEHEAD or ‘Chequamegon Heterogeneous Ecosystem Energy-balance Study Enabled by a High-density Extensive Array of Detectors’. It is an ambitious project, involving professors from multiple disciplines and universities from around the world. Their goal: conduct one of the most in depth studies of the interactions between the climate and ecosystems ever done.

More information about the campaign can be found here and here.

Where did the idea for this project come from?

The problem of scaling the interactions between ecosystems and the atmosphere has been something I’ve pondered my whole career. The idea for the CHEESEHEAD experiment to solve some parts of this problem came about during my last sabbatical leave from the University, five years ago in the German Alps. The additional time to focus on ideas with a variety of scientists in a new location allowed me to develop the initial concept. After that, it still took a few years of preliminary experiments funded by University grants in SSEC, CCR, and OVCRGE, several undergraduate and graduate theses, and a few rejected proposals before I was finally able to convince the National Science Foundation and a few other agencies to fund us last year.

This campaign has quite a few research goals. What are some of the big questions you are hoping to answer?

The land surface, through its exchange of heat, water, and greenhouse gases like carbon dioxide, acts as an important control on the development of weather and patterns of climate across the globe. As a simple example, think how different the same weather feels in downtown Madison, along the lake, and out in the nearby countryside. That is one effect of land surface on sensible weather. At larger scales, activities like deforestation can change entire precipitation patterns for decades in places like the Amazon.

All computer models used to predict and project weather and climate have some simplified representation of these processes. However, real-world ecosystems, which are made of multiple, interacting biological organisms, vary dramatically over space and time. We’ve never really had the opportunity to test when and where these variations are important, how to best measure those, and how to evaluate and improve the computer weather and climate models. We also have a second interesting issue in that one of our core measurements for this, called “eddy flux towers”, has a known measurement bias that we hypothesize to be linked to not-well-measured circulations in the atmosphere. We think these circulations arise from complex spatial variability in water and heat exchanges that change with the season. If we’re right, we will be able to correct this measurement issue for this first time in a rigorous fashion.

What makes this project different from others in the past?

CHEESEHEAD is implementing the world’s highest density of land-atmosphere and atmospheric boundary layer measurements from towers and aircraft in one weather or climate model “gridcell”. We chose the Park Falls, Wisconsin area because my lab, with partners at NOAA, have been making atmospheric measurements on a 1500-foot-tall (450 m) television tower (WLEF-TV), operated by the State of Wisconsin Educational Communications Board, for nearly two decades. Our 10 by 10 kilometer domain is centered on this tower. The area is flat and lightly populated, and representative of the high level of spatial heterogeneity we see in the forest, wetland, lake landscape that covers much of central North America.

We have 20 of these eddy flux towers, that are complemented by a range of low-flying aircraft, dozens of ecological plot observations, and several state-of-the-art ground-based atmospheric profilers that use lasers, soundwaves, and radio waves to detect variation in heat, humidity, and winds with height. Earlier studies have had smaller numbers or density of towers, and rarely with the additional atmospheric observations. Most studies, except a few, have focused on simpler vegetation like grasslands and rarely include forests or lakes. Our goal is to create a benchmark, open-access dataset that could be used by a diverse array of scientists and students, including atmospheric scientists, but also ecologists, hydrologists, limnologists, and climate scientists.

What field work have you done so far?

Site preparation began nearly a year ago, with permitting, preparation, and lab testing last fall and winter. The National Center for Atmospheric Research in Boulder, Colorado and my lab erected the 19 new towers over the spring and groups from NOAA, KIT in Germany, SSEC, and others arrived with more instruments in June. Our core campaign period is from late June to mid-October 2019. Within those, we have three one week-long intensives in three different seasons (early summer, late summer, and fall), during which the University of Wyoming’s twin-engine turboprop plane will fly over the domain at low-altitude (300 ft above ground) for 7 hours a day.

We just had our first intensive, with nearly 40 people in the field including a number of AOS graduate and undergraduate students. Several groups are out all summer, operating instruments, making forest plot measurements, or launching weather balloons. My post-doc Brian Butterworth and lab manager Jonathan Thom are alternating living with their respective families in a UW field station (Kemp Natural Resources Station), to direct much of the daily operational logistics.

As the campaign is going to be an ongoing project, what remains to be done from this point in time?

There are two more intensives left, and then a lengthy period of removing all the measurements. With SSEC staff member Rose Pertzborn, we are helping local middle school students collect additional soil and water data at our towers this month. The tall tower and some measurements are long-term, so we will continue to operate those. The really fun part begins later this year, as we try to acquire all the observations, investigate initial results, and start working on hypothesis testing over the next several years and beyond. All the data will be made public by next spring!

What has been the most interesting thing you have discovered so far?

We are already seeing evidence for some of the previously mentioned circulations in our airborne data, some of which I get to see in real-time while flying on the right-seat of the airplane. My PhD student Sreenath Paleri also set up a very high-resolution atmospheric simulation called a Large Eddy Simulation (LES) that is run on a supercomputer in Wyoming. We did this to simulate the experiment in advance of measurements so as to select and optimize our experimental design. With assistance from a scientist at the National Ecological Observatory Network, Stefan Metzger, and my former PhD student, Ke Xu, Sreenath demonstrated that we have a high probability of success in scaling our tower and airborne measurements using our proposed method. We’ll have to wait to see how right that turns out to be!

Students from the AOS404 Meteorological Measurements course also conducted their own experiment where they “chased” air parcels with weather balloons and backpack greenhouse gas measurement lasers across the mosquito and tick infested domain. The students showed intense dedication to their craft and exceptional teamwork in challenging conditions. They will be presenting their findings on campus in August, so stay tuned for those.

In the meantime, I’ve learned a lot about leading a large group of scientists from multiple countries and organizations. While I’ve been involved in many field projects, this is the first large intensive I have led, with nearly 70 people and more than $4 million dollars of investment from granting agencies. I am humbled by the hard hours many have put in, and the large amount of on-the-fly troubleshooting and teamwork that occurs in any project like this. I’m excited to see this team grow and evolve as we continue to collect measurements and report on findings!