Terry Kelly, (B.S. 1971) received the UW-AOS Alumni Award for Outstanding Achievement. The award was presented at a talk given for the department on March 4, 2019. 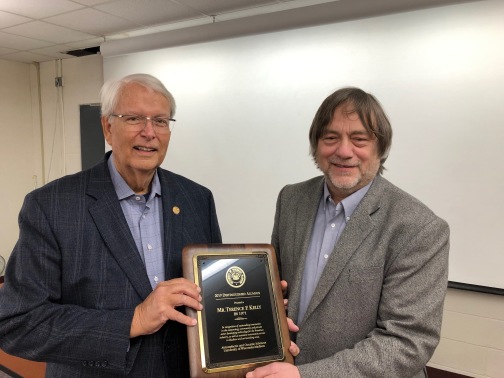 A New York City native, Terry earned his Meteorology degree from the UW-Madison in 1971 and then worked as a Staff Meteorologist at the UW’s Space and Science Engineering Center. From 1974 to 1985, he was Chief Meteorologist for the Wisconsin TV Network, a group of four TV stations serving central and western Wisconsin. From 1974 to 2000 he founded or co-founded Weather Central, a weather forecasting company for business and the broadcast industry; ColorGraphics, the pioneering system which has become the basis of all weather graphics and animation in the delivering of weathercasts on television in the United States; and MyWeather, a system which provides weather forecasts and warnings via the Internet and to addressable devices such as pagers and cell phones.

He is a named inventor on 12 current and an additional 12 pending U.S. Patents. Form 1995-2005, he was a managing partner in Shockley Communications overseeing the groups’ 6 TV stations during which time he managed the rebuilding of all of the TV stations to accommodate High Definition broadcasts. In 1977, he was named Best Television Reporter by the Madison Press Club for Distinguished Journalistic Achievement. Active in the Madison community, he co-founded the Aldo Leopold Nature Center in 1994 and the Madison Fireworks Fund in 1992, for which he has annually produced the Rhythm and Booms July 4 music and fireworks show, which is the largest single day entertainment event in Wisconsin.

A public talk will be given on Tuesday, March 5 at 7PM in room 1100 Grainger Hall.